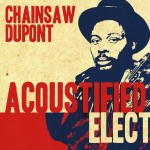 Raw. The word is sometimes mistakenly substituted for “loud” or “raucous” or “rough”, but those are only approximations that don’t fully appreciate what raw really is. Raw is the uncooked, unpretentious, unplanned, improvised joy of existence in the moment, and these recordings exemplify the best of it, recorded during sets which were famous/infamous in their own way, but which were so stripped down that there was no possibility of pretense.

The acoustic set that comprises the first part of this CD is almost legendary now. It’s a short dinnertime acoustic set that became known as the “warm Christmas” set, recorded at Chicago’s Uncommon Ground cafe during a freakish Christmas week that featured 60 degree temperatures. Chainsaw Dupont, with two guitars, a 12-string semi-amped acoustic, and a telly copy run through a tiny amp, in a tiny brick wall room with perhaps two dozen people stuffed into it for dinner and some live acoustic blues. Some of the songs were still just shadows of their final selves, others were improvisational takes on songs which had been recorded with a full band but never played in solo arrangements, delicately improvised and delivered in an explicitly intimate environment.. A ‘high-wire’ act, indeed, live to 2-track.

The other set represented might have been doomed, even though it was recorded at a room that Howlin’ Wolf was purported to have played at years earlier, a 30-foot-wide square room under the “L” tracks on Lake Street which Chainsaw called home at the time. Even though Chainsaw’s weekly set at this west side lounge was on Sunday night, these songs were recorded at a Saturday gig which was hastily organized to take advantage of an unexpected favorable review from a prominent music writer. We hired a local guy who did live to DAT recordings, and set up a small video camera to record what we were sure would be hundreds of new fans who want to see the next big thing. I bought stencils and paint and brown butcher paper to create a poster that we encouraged people who attended the show to sign (we ultimately had far fewer names than we thought we would).

Chainsaw’s less-than-loyal regular bass player and drummer (one of a succession of temporary Blues Warriors of the era) backed out at the last minute, lured by a better-paying gig downtown. He found two veteran replacement musicians who agreed to show up early and rehearse with him for a few hours to learn the songs. With only their wits to fill the gaps, they roared through 3 sets featuring a grinding guitar fed through a Fender amp with enough dirt to fill a graveyard. The recording is very LO-FI, but it includes the sounds of a typical tiny blues lounge, glasses clinking, the squeaky door opening and closing, laughter and chatter and singing of the regulars, and even, if you listen closely, the sound of the “L” roaring by outside the door, during the quiet passage of “Don’t Lie To Me”, where Chainsaw tells the small audience that they are being recorded.

The anticipated crowds never materialized, and as the night went on, the show began to unravel into blues karaoke, with some of the few lounge regulars sitting in at the owners’ insistence, even though the band didn’t know the songs requested. Near the end of the night, one determined patron who had requested “Straighten It Out” all night frayed Chainsaw’s last nerve, and he can be heard testily telling him “We’re gonna straighten it out, all right, we’re gonna play one more and get outta here”, before ripping into a violently energetic rendition of the Howlin’ Wolf classic “Killing Floor”. (This disrespectful audience insistence on playing requests led to a lyric I laterwrote which ended up on the Lake St. Lullaby album’s song “Saccharine”: “You must think I’m a juke box baby / Or an ATM machine”).

After “Killing Floor” — this was about 2:30 a.m., official closing time for licensed bars in Chicago, and a full 10 hours after Chainsaw had come in to rehearse with musicians he had never played with before — Chainsaw said good night and started packing up, but the owner demanded that he keep playing, so that the bar could make more money by selling drinks to already-overserved patrons, well past closing time. He decided enough was enough, and the bar owner refused to pay the band anything, which meant first I had to hold Chainsaw back from punching him, and then shortly after he had to stop me from punching him. We scraped together enough money to pay the pick-up band members out of our pockets, and told the owner that the weekly Sunday night gig, which Chainsaw had been playing for tips, was officially over. Later, I wrote the the swamp folk “Last Chance Lounge” to immortalize the events of the night, meaning that there were 2 songs inspired by the night’s proceedings, perhaps some sort of karmic payback for the indignity. However, the only way Chainsaw will ever get paid for that nasty night is if enough people buy the “Acoustified/Electrified” CD. Frankly, it’s not such a hardship, the songs recorded here are passionate, raw examples of how improvisational talent can raise the level of a performance to great heights.

STREAMING PLAYER OF ALL THE NON-COVER SONGS:
http://www.chainsawdupont.com/ae